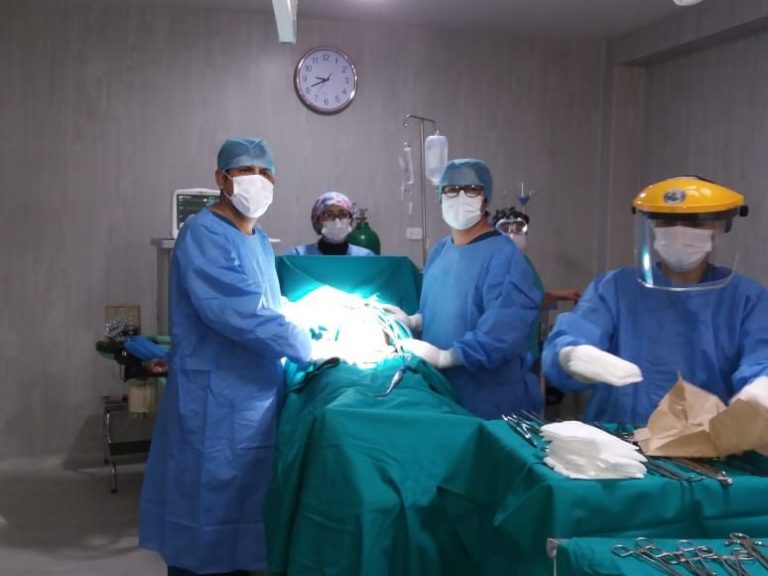 Update from Bambamarca, Peru: New operating theatre for a clinic and classrooms for a technicians’ school

The long awaited operating theatre for the clinic San Luca was finally completed! The surgical theatre is a huge improvement for the region around Bambamarca in Peru, which we’ve been supporting through various projects by our partnered organization in the area.

The Asociación José Dammert Bellido in Bambamarca has been working to improve the locals’ health for the past 14 years. It started in 2003 with a doctor’s office, where a doctor treated people for free on Sundays and continued – from 2011 – with a self-governed health centre with several doctors, which has continued to grow and now works 24 hours per day in Bambamarca. So why was an operating theatre needed for the clinic San Lucas? “You can be absolutely sure that this operating theatre was desperately needed,” wrote Fredy Lozano Vazquez, the Asociación’s health officer, in his closing report. 80 per cent of the population of Bambamarca lives in rural areas, where health centers are far and few between and can usually only be found in the cities. The next operating theatre is five hours’ drive away in the city of Cajamarca – in past emergencies, many patients did not make it that far.

Thanks to the new operating theatre in Bambamarca, the locals can be treated much more quickly. Charity Cat helped to build and equip it with several financial donations. The money was largely used for the alterations that had to be done. Most of those came completely unexpectedly because of the requirements made by the health ministry. These restrictions meant that they could not turn an existing room into an operating theatre but had to alter a part of the building, including tearing down old walls, putting in new walls and changing the location of windows and doors. After the alterations were done, new electricity wires as well as water and oxygen pipes were put in and the whole room was tiled. Afterwards, the interior was fitted with the necessary specialist furniture and equipment, which had finally arrived after some initial delivery pronlems. The first operation could already take place in February as well as seven births – until the Covid-19 pandemic hit. Since April, the state hospital, which doesn’t have its own surgical theatre, has been using the operating room. This year, we have been continuing to send financial support for the health centre (the latest donation was in October).

100.000 new trees to stop erosion – Plus: new classrooms for the school for technicians now in use

At the same time, Charity Cat supported two more projects in Bambamarca. Firstly, we donated money to help a tree planting project to continue, which allows 100.000 trees to be planted per year in order to stop erosion in the mountainous region. Secondly, we supported a technicians’ school, which offers courses and apprenticeships for craftsmen.

In 2019, we helped to finance the development of a total of five classrooms in two storeys of the school including bathrooms. The rooms are being used by students of an electricians’ class and technician apprentices.

PHOTOS: The school for technicians Aulas Local De AJDB Bambamarca and the new operating room in the clinic San Lucas.